Please be aware that Rannoch Moor is serious wilderness terrain: 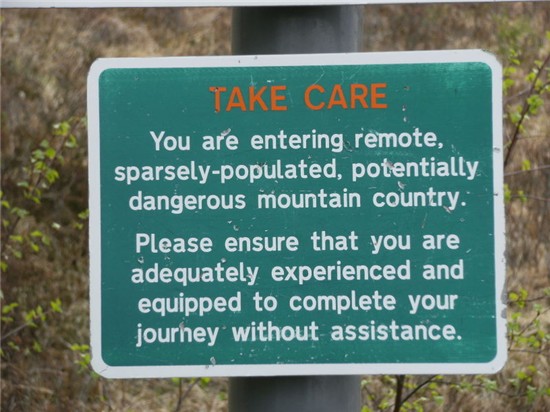 The Rannoch Moor section is not to be taken lightly due to:

The walk is possibly best split into the following sections:

The following are options for staying overnight:

Note that the YH and the bothies can be busy at weekends and there may be no space available.

Starting at Kinlochleven head up the track between the River Leven and the Ice Factor (NN189620), crossing the river with the West Highland Way. Head in a NW direction to pick up the path going upstream until you reach the Blackwater Reservoir (NN248607), which was not there at the time of the book. There are several old ruins from a World War 1 POW camp that can be found on the way up to it. 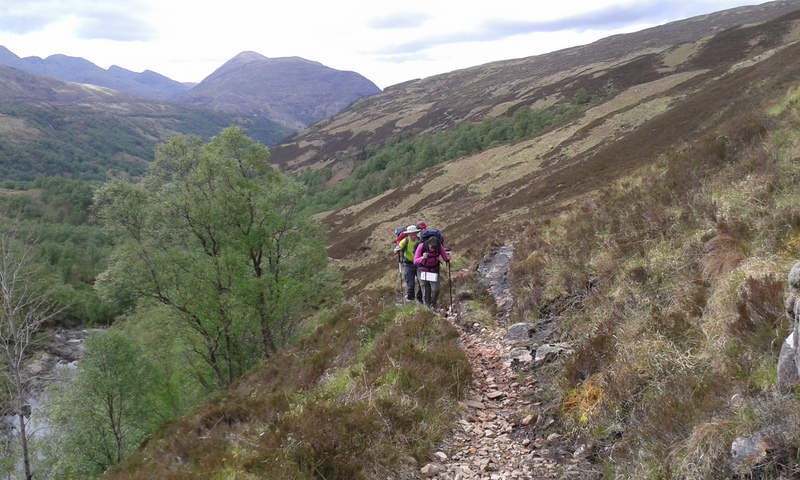 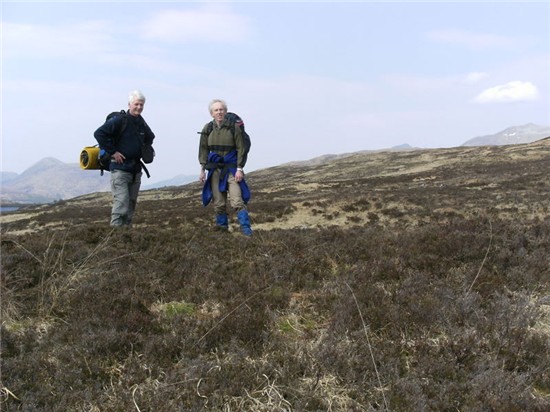 Note that from the reservoir to Loch Treig you can expect very boggy ground and slow going.

Follow the faint path along the north shore, turning NW to follow the Allt an Inbhir river. Do cross the river to look at the monument (NN265613) where a Reverend from St Albans died in the 1800s. It is worth noting that many people have perished on Rannoch Moor, particularly workers who got off the train at Corrour Station and tried to make their way over to the reservoir during its construction. In more recent years, several climbers died trying to get to Ben Alder Bothy from Corrour Station one winter.

On a more positive note, the bothy (NN289634) at Loch Chiarain is a welcome sight.

From the bothy follow the path up to Loch Treig where you join a good estate track (NN320687) which will take you to Loch Ossian and/or Corrour Station, depending on your chosen destination. 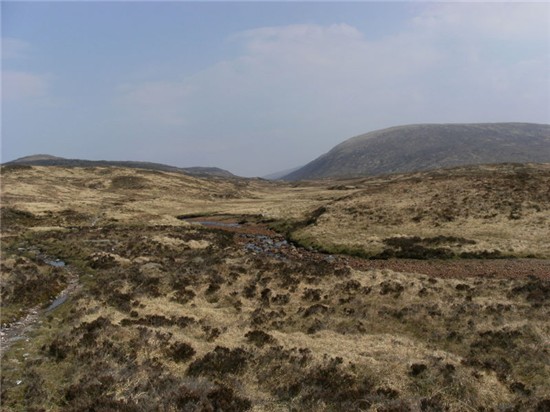 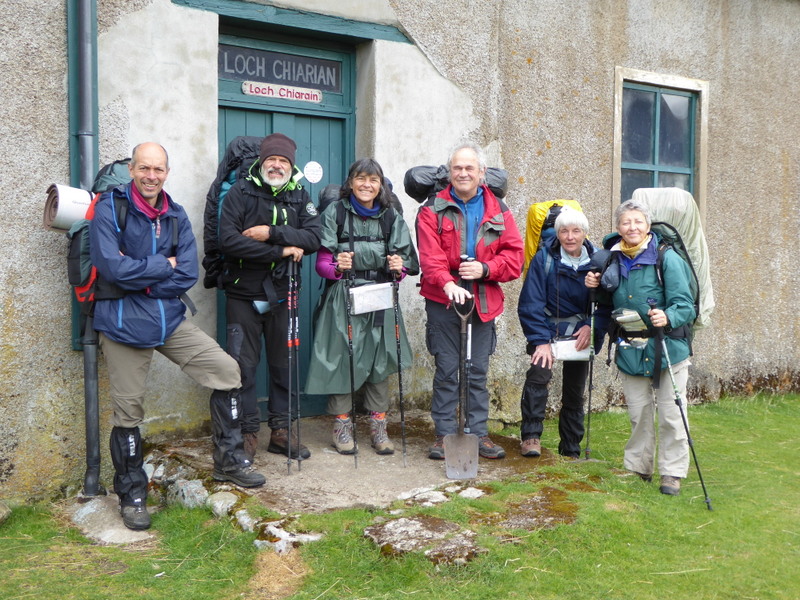 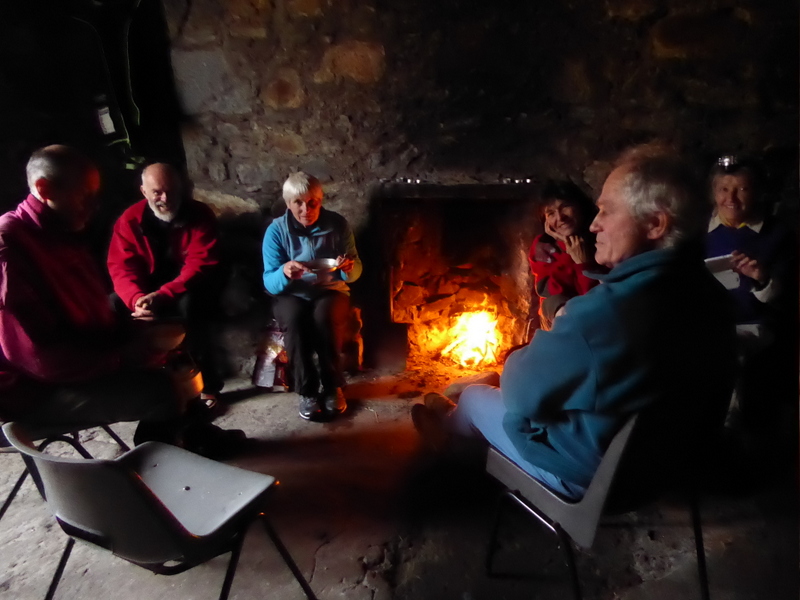 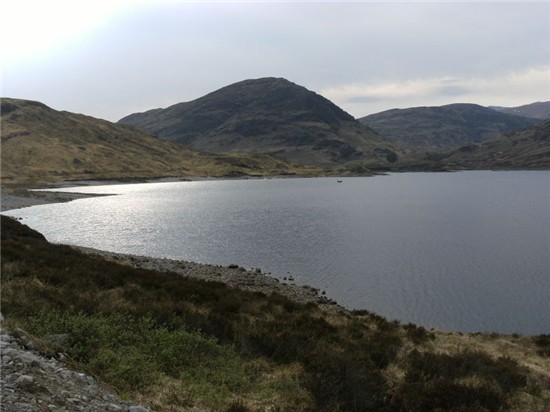 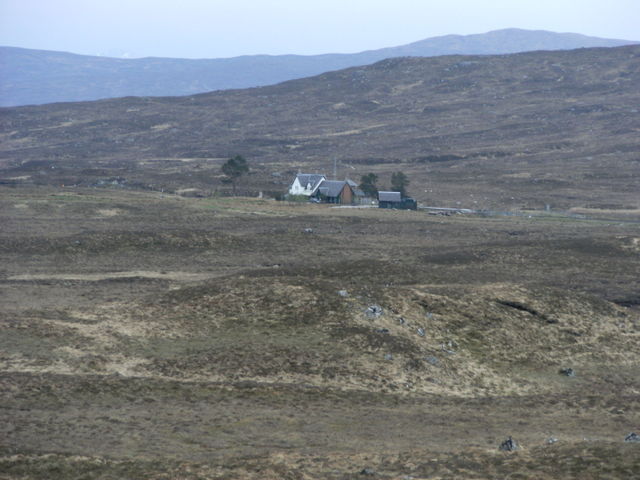 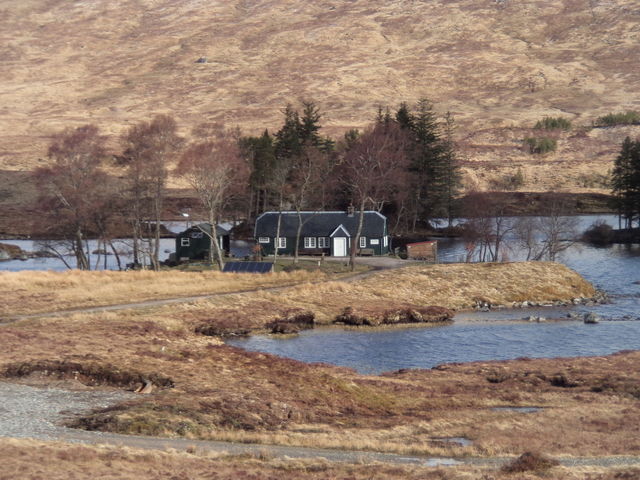 Corrour Station to Bridge of Gaur

You can chose to take either the north or the south track round the loch. The north track does take you through some lovely estate grounds and round the back of the splendid Corrour Lodge.

Approaching Loch Ossian, with the huge bulk of Ben Alder in the distance: 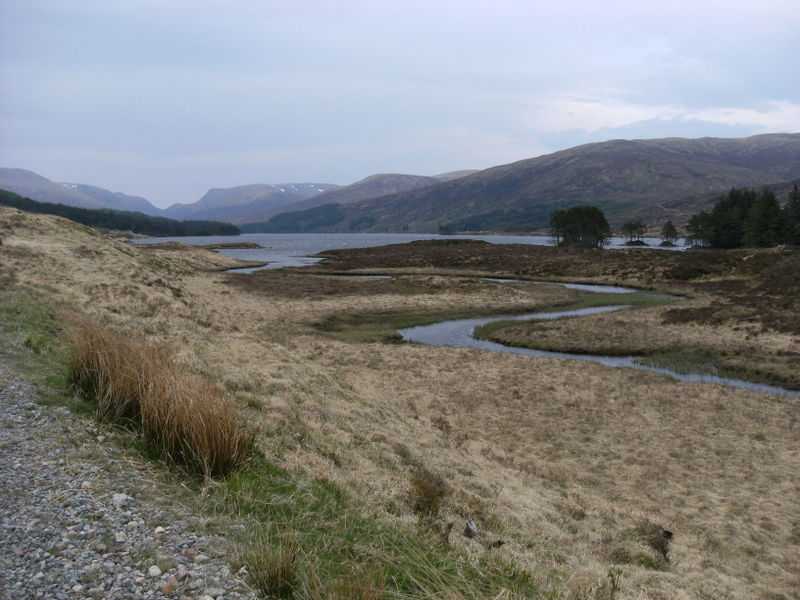 At the back of the Lodge take the path (NN413697) along the Uisge Labhair. Avoid the track heading up the hill heading for the Munros as you really want the one down by the river. Again the ground can be boggy until you reach the stalkers path at the Bealach Cumhann (NN467718). On the map the path crosses the river and just stops. However in reality it continues along the river towards the Bealach Dubh. If the river is full then it might be best to continue along the path until you cross another river coming in at NN427765. Once you reach the Bealach then you have a good stalkers path all the way down to Ben Alder Bothy (NN498670). 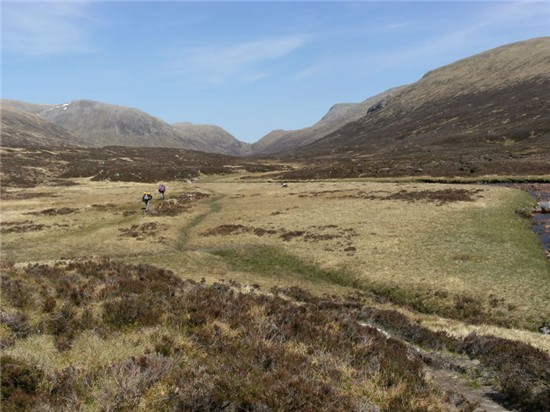 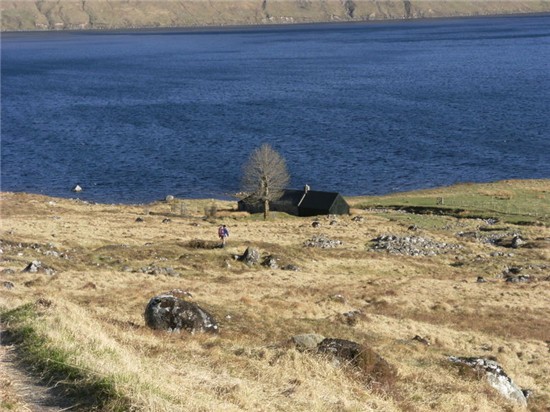 Ben Alder Bothy is the nearest one is ever going to get to Cluny’s Cave/Cage, which features in the book. Many have looked for it and failed – so don’t bother trying!

If the bothy is full then there is good camping ground either outside it or in the wood across the river. Note the way branches have been sawn off the trees for the bothy fire!

In the book the two are rowed across Loch Ericht but that is not possible now, so take the path along the south side of the loch. There is the occasional post to mark the path and when you reach a deer fence do not use the style but continue along the path by the shore. Eventually you will reach a good track and then come to an estate hut (NN488640). The path divides here: you can either take the estate track to Loch Rannoch or continue along the loch and come out at Ardlarach (Alan Breck’s old house) on Loch Rannoch. To take the Ardlarach route, follow the faint path past the deer target and head along the side of the loch until you reach the dam at the end. From here you have a good road down to Loch Rannoch. At NN525589 take the faint path down to Ardlarach where you will enter this working farm from the rear. At the front of the house you will see the marks of an old porch above which there used to be a plaque commemorating the real Alan Breck's stay there while he was being hunted by the Redcoats. 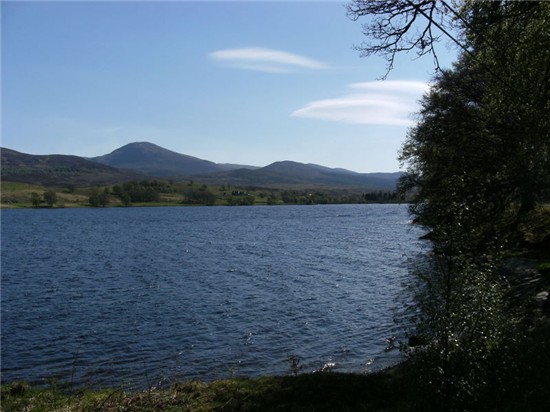 Again in the book, the pair were rowed across Loch Rannoch and were advised to head west rather than east, as Alan Breck so wanted to do. Today there is no option but to walk along the loch instead. However this is a very pleasant walk along to Bridge of Gaur. As you cross the bridge over the River Gaur you will see the rather splendid Rannoch House on the right. This is built beside the remains of the old Rannoch Barracks where the Redcoats were billeted. Beside the Bridge of Gaur village hall there is an interesting information board with details of the barracks and the first Munroist.

100m past the village hall there is a track heading SW into the hills. This is the start of the next section of the Stevenson Way - Rannoch to Balquhidder.

From here you can carry on over the hill to Loch an Daimh where you could be met by a friend with a car. Following the path from Bridge of Gaur take the path heading East over the bridge at NN497528 and then turn South at NN510527. This old track gradually peters out and you continue on to the bealach to pick up the track leading down to Loch An Daimh.

Alternatively you can walk along the road to Rannoch Station (NN423587).

Ben Alder from above Loch Rannoch: 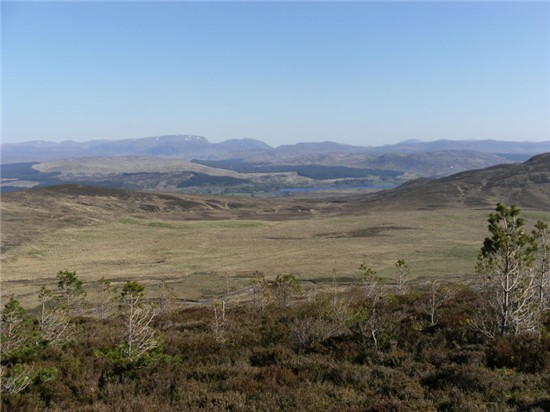