Robert Louis Stevenson deliberately gave vague details for route that David was meant to have taken from Erraid to Edinburgh. For example David Balfour declares at the end of chapter 15 that "having travelled the greater part of that big and crooked Island of Mull, from Earraid to Torosay, fifty miles as the crow flies and (with my wanderings) much nearer a hundred, in four days", with no places in Mull mentioned apart from the start and finish. There are a few obvious places mentioned in the book which help to provide some markers but we are mainly left to our imagination as to the route. Some parts would not be recommended, for example the map shows the route going over the Aonach Eagach ridge in Glencoe - that is serious and dangerous terrain!

Due to the distance involved and the remoteness of much of the route (for example there are no shops between Kinlochleven and Strathyre - generally there are very few places to buy provisions), it is expected that most walkers will complete the Stevenson Way in short sections, carrying their own food. It is possible to do most of the route in weekend stints but Mull and the Rannoch Moor sections are best covered in 4 days. The Route page for each major section will include options for breaking it up into 2 day stints.

There is a DVD on the Stevenson Way available and you can see a preview here. The DVD now has subtitles in English, French and German. Please contact us if you would like a copy (£5 plus postage).

There are three maps here, a quick overview one, RLS's one for the book, and a dynamic one at the bottom.

This map gives a rough outline of the route of the Stevenson Way: 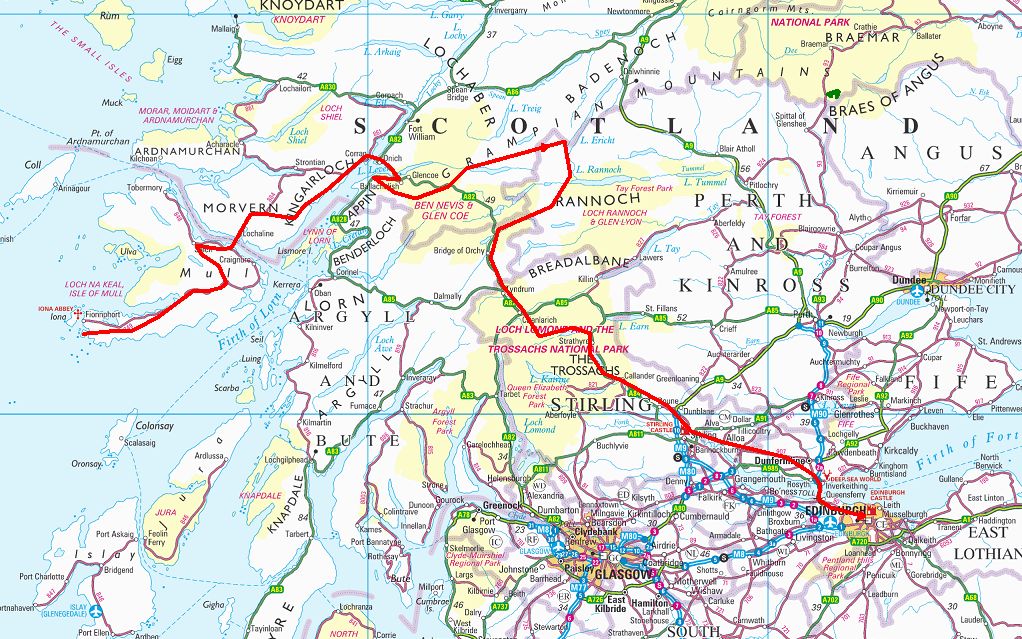 Map references are given in the usual OS 6 figure format e.g. (295196).
Associated photographs can be viewed in the Photos page.

RLS's Original Instructions for the Map

Here are the original instructions from RLS to his cousin David A. Stevenson for the drawing of the map:

On the small map please mark the course of a ship, in red, leaving Queensferry going North - about midway between the Orkney and Shetlands, passing in near Cape Wrath through the Minch, near in by Canna, round Coll and Tiree, close round their S. end and the S.W. end of Mull where, close in by the S. side of Earraid, it is supposed to strike.

On the large map, a red line is to show the wanderings of my hero after his shipwreck. It must be sometimes dotted to show uncertainty; sometimes full. As thus, it begins on Earraid, he crosses at Low Water, and passes along the Ross and across Mull to Torosay; line dotted across Mull. He then goes by water to Kinlochaline and by road to the shore of the Linnhe Loch to the S. corner of Loch Leven: wood of Lettermore on the advance beyond Rudha Bod Buith - not at Rudha Mor: line still full. Thence along the hilltops to Duror: full. Thence up the S. side of the river Duror, and the N. side of the river Creran, and over Ben Maol Chalicum and across the Coe below Meannerclach: dotted. Thence round the outside of the hill-tops above the Coe and then above Loch Leven to a place above Coalisnacoan: full. Thence along the hills on the S. bank of the river Leven: full till you get near its fountain. Whereupon the line becomes dotted, and staggers up to Ben Alder. From Ben Alder, full again, across Loch Erricht, and down its east side, and across the head of Loch Rannoch. My hero then takes the hills and turns the head waters of Glen Lyon, Glen Lochay and Glen Dochart; at such obvious points of his itinerary the lines might be full, and between dotted. The line (full again) descends Balquhidder from the top, turns down Strathire, strikes over Uam Var, hits Allan Water above Kippendaire, descends Allan Water to the Forth, along the N. bank of Forth to Stirling Bridge, and then by round by Alloa, Clackmannan and Culross, till it issues from the map; for I fear we don’t reach Limekilns; which we really should have done, for from that point my hero crosses the Firth to Cawiden, and thence to Queensferry. Terminus Malorum.

If room can be found all the places I have named, might be named upon the map, except Glen Lyon, Glen Lochay, Glen Dochart, and the Duror and CreranRivers, and Rudha Bod Buithe, and Ben Maol Chalicum, and Meannarclach. The improbability of the itinerary is not so great as it appears, for my hero was trying to escape - like all heroes…

It should be lettered 'Sketch of the cruise of the Brig Covenant, and the probable course of David Balfour's Wanderings.' 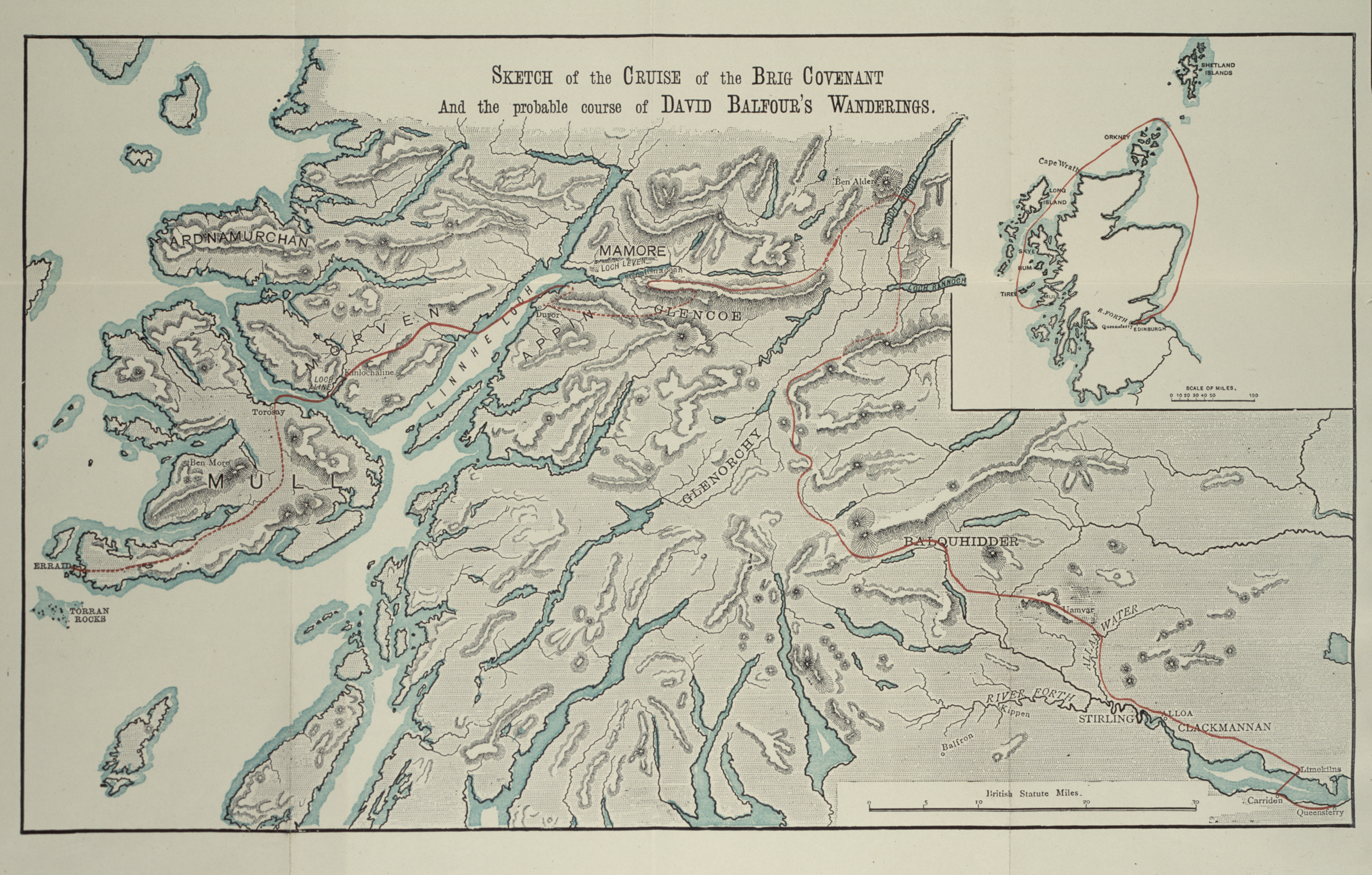 The map below is part of the Ordnance Survey OpenSpace mapping facility. The zoom control on the left-hand side allows you to zoom right down to 1:50000 scale maps with OS grid references as well - a very useful facility.